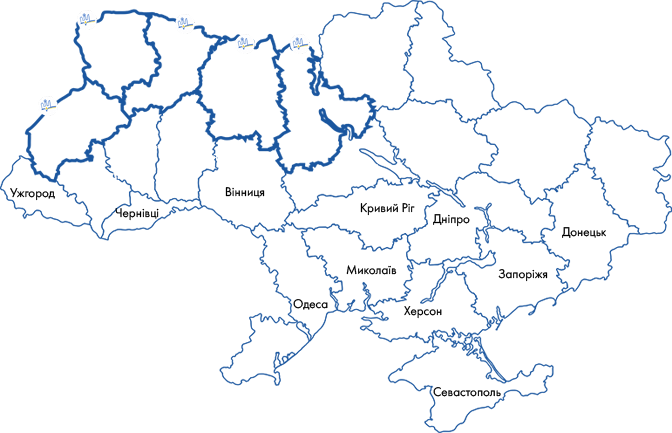 Ukraine – a picturesque European country with a rich history and cultural heritage, universally famous for its remarkable nature, delicious food and freedom-loving Ukrainian people.
On the territory of modern Ukraine there are famous settlements of many archaeological cultures since the Paleolithic era, but the starting point of the Ukrainian Slavic state and culture is Kievan Rus of the IX-XIII centuries.
This state, that gave the world Princess Olga, Volodymyr The Great, Yaroslav the Wise, Roksolana, Ivan Fedorov, Petro Sagaidachny, Bohdan Khmelnytsky, Taras Shevchenko, Mykola Gogol and Lesya Ukrainka.
However, our country is popular not only because of these people – here such prominent artists as Andriy Kuzmenko and Bogdan Stupka, Klychko brothers and Vasyl Virastuyk created their works.
MORE ABOUT THE REGIONS
15 interesting facts about Ukraine

The biggest country in Europe

Ukraine occupies 0,41% of world land area, which is home to 0.85% of the world’s population, bringing 0.20% of world gross national product

First educational institution in Eastern Europe is based in Ukraine

Pylyp Orlyk’s constitution is one of the oldest in Europe

Ukraine has developed an aircraft with the world’s largest payload

Ukrainian Antonov’s design bureau has developed the An-225 “Dream” aircraft with the world’s largest payload capacity of 253.8 tons.

Largest tin monasteries are called Lavra. Only six monasteries in the world have the status of a Lavra. Three of them are in Ukraine

There are 1,384 monuments to the famous Ukrainian poet Taras Shevchenko in the world

1384 monuments to the genius of the Ukrainian people, thinker, poet and kobzar Taras Shevchenko have been erected in Ukraine and 35 other countries. None of the famous cultural figures has so many monuments

Arsenalna metro station in Kyiv is the deepest in the world

It runs underground at a depth of 105 m. The station near the parliament building was built in 1960, and it was one of the first ones

The map, as well as the oldest settlement Homo Sapiens is located in the village Mezhyrich of Kaniv district of Cherkasy region, in the interfluve of the river Ros and its tributaries Rosava. They are about 14.5-15 thousand years old. The map is embossed on the mammoth bone

With their help, commercial cargo is sent into space within the framework of the international project “Sea Launch”

Ukraine is the geographical center of Europe

Chernozem soils with the right cultivation give the highest yield. During World War II, German soldiers even took chernozem by train

The Ukrainian wind instrument is the longest in the world

Trembita (trembita) is the longest wind musical instrument in the world. Length from 2.5 to 8 meters, diameter about 30 mm, increases in the bell. Distributed in the eastern part of the Ukrainian Carpathians

This folk song was recorded by Ukrainian composer Mykola Leontovych. The world knows her as Carol of the Bells or Ring Christmas Bells

Ukraine has one of the largest deserts in Europe

These are Oleshkiv sands or “Ukrainian Sahara”. Its area is over 160 thousand hectares. It is so big that it can be seen even from space!

The largest area in Europe is located in Kharkiv

Ukraine is located in Central and Eastern Europe at the crossroads of important transport routes between countries and continents. Modern Ukraine is a country of advanced digital technologies, endless expanses of picturesque sunflowers, wheat fields, incredibly blue skies and brave talented friendly people.